Looking for a person? Try the Find People directory.

Water at UO is used for dorm showers, kitchen and bathroom sinks, drinking fountains, the Student Rec Center’s swimming pool, and so on. We also use water to keep campus landscaping healthy and beautiful.

Our conservation and efficiency efforts include installation of low-flow showers and toilets. Eugene’s mild, moist climate means that we need less water for landscaping, though it still accounts for approximately a third of total water consumption each year. Our campus landscape team uses a computerized irrigation control system that adjusts watering amounts based on the weather. In locations where existing irrigation is unavailable, we often choose to plant species adapted to our climate rather than install new irrigation.

Eugene boasts some of the best drinking water in the nation and the university benefits from this supply. Our water comes from a single source, the McKenzie River, and is managed by Eugene Water and Electric Board (EWEB). Water first goes to the Hayden Bridge Water Filtration Plant, where it is filtered of any contaminants. In 2019, EWEB changed their water disinfection system, using an onsite process to create sodium hypochlorite (bleach), a less toxic process that also ensures that Eugene’s (and by extension the UO's) water supply will not be interrupted by chemical supply chain issues.

From the university, water flows through the sewer system to the waste water treatment facility that services the Eugene-Springfield area. Here the water undergoes several treatments before being released into the Willamette River. Removed solids undergo further treatments in an anaerobic digester that captures methane from biosolid decomposition that is then used for power generation. Finally, the process transforms biosolids into a nutrient-rich material used in agriculture, including at the Biocycle Farm, a poplar tree plantation, owned by the Metropolitan Waste Management Commission. 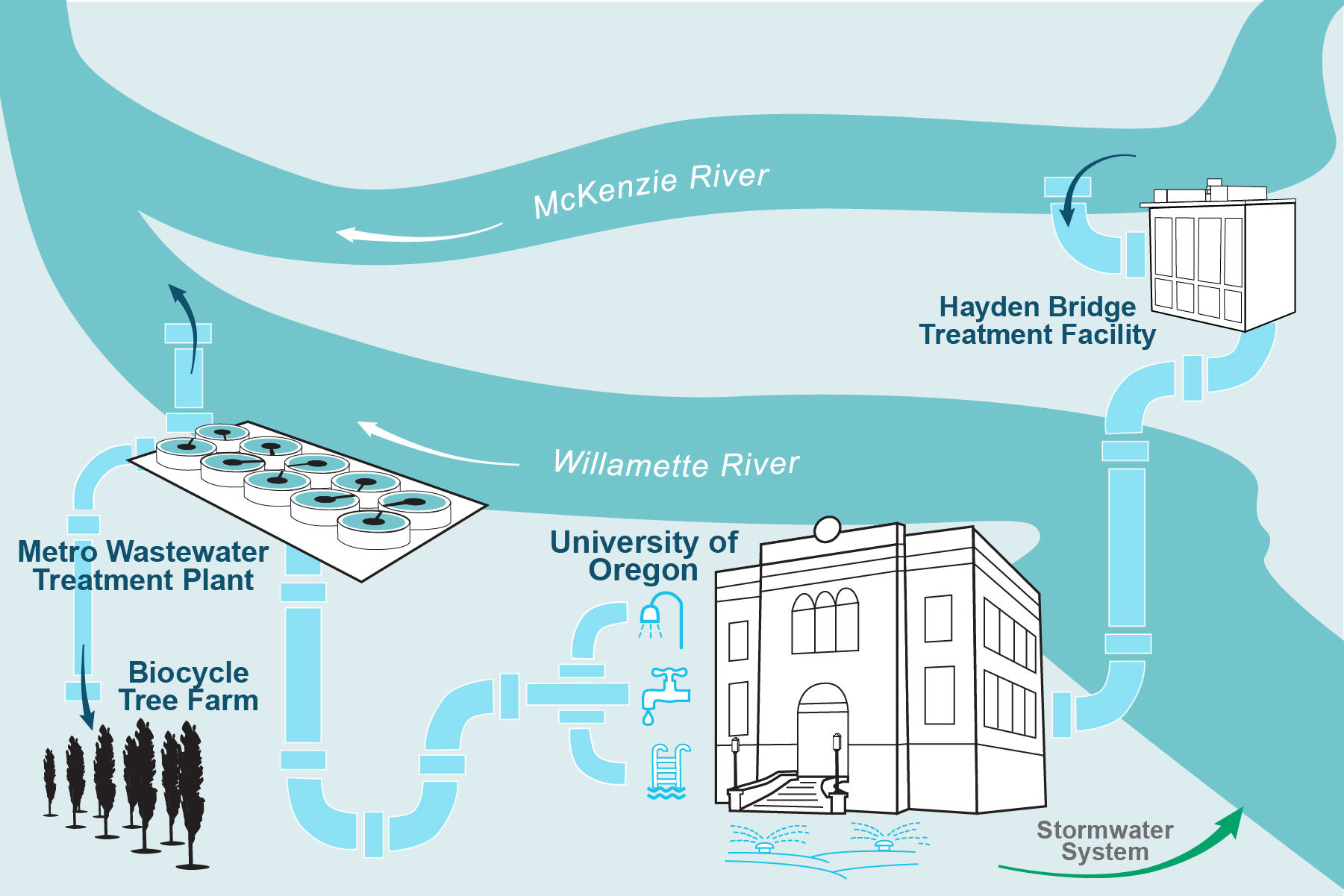 The monthly summary graph shows UO’s water usage year over year. You can toggle the graphic to see the water usage in total or per square foot of building space (although the total water used represents all of campus, both indoors and outdoors). The background wave shows the maximum and minimum amounts of water used that year. We have presented both of these views to show that even with increased building square footage, the university is decreasing our overall water usage in recent years. These metrics showcase efforts on campus to increase water efficiency through building features and reducing water usage for landscaping.

The detailed usage graph presents a more granular look at UO’s water usage. Play with the settings to see smaller or larger spans of time. The data show intuitive spikes in water usage during the summer months and less water usage during our region’s rainy season. This graph also shows total water used, as well lines showing water used specifically for landscaping and for other uses (cooking, showers, toilets, etc.).